Special message from Alan McIntyre, Chairman of the Board 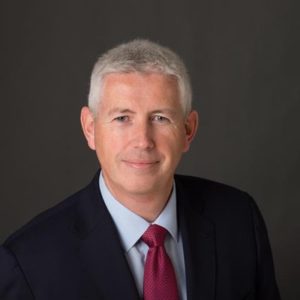 Dear Friends of the Stamford Symphony

America’s journey to the quiet place took only a few days. The big metronomic calendar-filling blocks like school, college, and work travel are all gone. As are the add-ons like music lessons, kid sports, and church services, not to mention life’s luxury accessories like professional sports and the performing arts. 10 days ago I was at the Jazz Standard in New York listening to the Mingus Big Band.This Monday it’s closed till further notice and many US cities have shuttered all performance spaces, bars, restaurants, and non-essential services to dampen the contagion.

The pendulum has swung hard over the last week from what many considered institutional complacency to coordinated and far reaching social isolation policies. Pockets of “goddammit this is America and I can do whatever the hell I want” libertarians are now vastly outnumbered by Facebook busybodies posting that “they saw a group of teenagers at the beach and somebody should do something about it”. American dogs don’t understand corona virus, but they’re delighted by the surge in walks they’ve had over the last week as everyone looks for an excuse to get out of the house without congregating in groups.

The message that this isn’t a drill broke through around the middle of last week triggering a cascade reaction. Some restrictions are top down, like the European travel ban, but many are bottom up from town councils, school boards, community groups and arts organizations like the Stamford Symphony. Because of our inability to ramp up testing, America’s confirmed cases of Covid-19 are still less than 12,000, but with all 50 states now affected, the next 2 weeks will likely see a ‘testing epidemic’ as identified cases rapidly catch up with the true magnitude of the infection. This projected trajectory is why “an abundance of caution” is now a widely accepted rationale for the draconian measures being put in place to limit interpersonal interactions and why the Stamford Symphony has cancelled our last two concert weekends of the year.

We are used to battening down the hatches in America. In Connecticut we get winter storms that regularly drop 2 to 3 feet of snow in 24 hours, and the whole Eastern seaboard regularly has multi-day hurricane-induced interregnums in normal life. In the past those natural disasters have caused us to cancel and reschedule concerts. The big difference with this pandemic is both the national scope and the uncertain duration. Last Thursday my 20-year-old daughter at college in Maine was told to clean out her dorm, get home, and not come back for the rest of the academic year. Local schools in Darien were shut down for two weeks last Thursday, but it was clearly just an opening gambit that’s almost certain to be extended by weeks if not months.

This abrupt dislocation means we’re still in the transitional period before any sort of new normal asserts itself. My kids have responded by disappearing into their well-established virtual communities. Rather than a normal quiet Friday morning with them all at school, our house was instead filled with the raucous shouting and laughter of our three teenage boys coordinating ‘Rainbow Six Siege’ assault parties on their X-Box and trash talking their friends.

But given the likely multi-month disruption, some sort of new normal will need to be established. Online college will move from a fast-growing niche for those without the money or time for a traditional campus-based education to the default for America’s 15 million college students. For those studying history the transition could be quite straightforward, but for my biology-major daughter it’s less clear how lab experiments will get done from a kitchen table 400 miles from college. For my 17-year-old son, this is the single most important academic semester of his school life, as it’s these grades that will shape his college applications in the Fall. It’s therefore inevitable that in the annals of education, the 2020 Spring semester will always have an asterisk against it.

More broadly, we’re about to witness a mass social experiment to move much of modern American life online. Anyone in knowledge industries is now working from home. The bylaws of many public and private organizations are being hastily rewritten to allow online quorums for important decisions. On Sunday morning our local Darien minister preached to an empty church, but also to an unknown number of parishioners sitting at home in front of their PCs.

Clearly one of the hardest hit sectors will be the performing arts. While we won’t have an orchestra on stage at the Palace Theatre for the foreseeable future, we are working hard to adapt to this new normal. We are exploring having our musicians live stream solo recitals from their homes, having them record practice sessions to give us more insight into how they prepare (even if they can’t currently perform) and whether we can make our archive of concert recordings available so that you can at least listen to the Stamford Symphony even if you can’t see the orchestra live. Subject to whatever restrictions are in place in a few months, we are also thinking about maybe having a summer concert series to bring live classical music back to Stamford at the earliest possible opportunity.

If, amongst the chaos, you want to find a silver lining in this viral cloud there could be two. The first is that when in the future someone eats monkey brains and enables an airborne Ebola-like killer to cross the species barrier we should be a lot better prepared. The next few months are not a drill and, while the impact on America is likely to be severe, it’s also an opportunity to learn how we might cope with something that has a 20% fatality rate rather than low single digits.

The second upside is the paradox that less social contact could create more social cohesion. The University of Delaware’s Disaster Research Center has conducted 700 studies of how communities react to floods and earthquakes and the results are compelling. While toilet paper hoarders make great headlines, the empirical research shows overwhelming levels of altruism, self-sacrifice, and the sharing of scarce resources. The instinctive human response in a crisis is typically not Darwinian selfishness but instead a surge of solidarity and community spirit. Those who were in New York City on 9/11 recognize that base human instinct to help, support, and lean in rather than panic and turn your back.

Although trapped in their homes it has been inspiring to see the many videos online of Italians singing from their balconies, using music to come together to mitigate their hardship and isolation and show the strength of their community. Fairfield County hasn’t reached the ‘singing from the balconies stage’ yet, but many church and community groups are already swinging into action to protect the vulnerable through meal services and errand runs, demonstrating a parallel contagion of kindness and charity. The Stamford Symphony intends to do what we can to also continue to share music and fellowship during this challenging time. We also intend to support our musicians to the best of our abilities in what is going to be a very difficult period for them as performance opportunities all but disappear.

So, as America settle’s in for the long haul of working through our Netflix backlog and figuring out what’s really at the bottom of our freezer, maybe we’ll look back on this as not just a challenging public health crisis but also as a moment of renewal. By being forced to isolate ourselves maybe we will relearn what true community is. It may be wishful thinking, but maybe the new habits we’ll learn will give us more time to enjoy what’s around us and appreciate what we’ve been missing in our frenzied pre-COVID-19 lives. Giuseppe Conte, the Italian Prime Minister, summed up that hope when he said last week “Let’s distance ourselves from each other today in the hope that we can embrace each other more warmly tomorrow.”

From everyone at the Stamford Symphony, stay well and keep your spirits up by listening to as much classical music as possible. I decided to have a Mahler afternoon on Thursday, and it rekindled my love for the unfinished 10th Symphony in the Mazzetti version if you have around 1 hour 20mins to spare and access to YouTube. Rest assured we will do everything possible to keep bringing you world-class music in as many different forms as we can until we can once again gather together in person at the Palace Theatre.

Where Arts Intersects with Technology 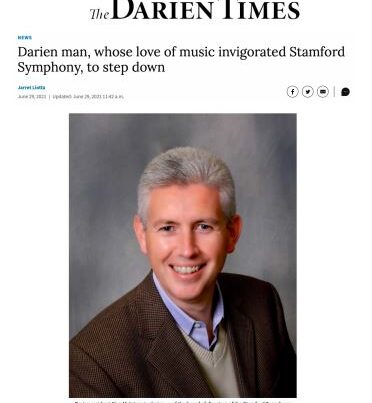 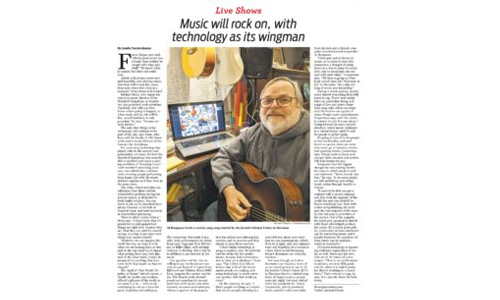 As seen in the Art Section of Hearst papers: Music will rock on, with technology as its wingman