2 hours with a 20
minute intermission

Joseph Schwantner described his work Chasing Light as “drawing spirit, energy and inspiration from the celebration of vibrant colors and light that penetrate the morning mist as it wafts through the trees in the high New England hills.” Now jump back to 1808, with Beethoven’s Pastoral Symphony, which he explicitly intended to evoke nature, including bird calls, the murmuring of gurgling streams, and the thunder of a sudden storm. It has not lost any of its ability to transport us. Juan Ramirez’s sensual and passionate Suite Latina, for string quartet and string orchestra, is a perfect vehicle for the high-octane Dali Quartet.

Learn more about the program during this pre-concert talk hosted by Music Director Michael Stern. Behind the Baton begins one hour before each concert at the Palace Theater.

A 40-minute, interactive pre-concert activity for families led by an Orchestra musician. MusiKids begins one hour before our Sunday concerts at The Palace Theatre.

This event is FREE with your ticket to the concert.

Sunday tickets for kids (ages 17 and under) are only $4 with the purchase of a regular ticket.

Sonia Morales-Matos Fiesta No. 2  for Strings and Percussion 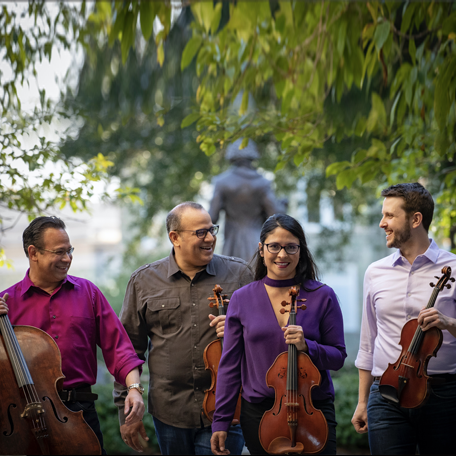 The Dalí Quartet is acclaimed for bringing Latin American quartet repertoire to an equal standing alongside the Classical and Romantic canon. Tours of its Classical Roots, Latin Soul programming have reached enthusiastic audiences across the U.S., Canada and South America. Its fresh approach has been sought out by distinguished series in New York, Toronto, Philadelphia, Washington DC, Los Angeles, San Diego, San Jose, Seattle, San Juan and countless communities beyond. The quartet has been called upon for return engagements at the National Gallery of Art, Friends of Chamber Music in Portland, and Chamber Music at Beall, among others. This season the Dalí tours from Philadelphia and DC all the way to Oaxaca, Mexico, including two Midwest residencies – at the University of Iowa and for the Chamber Music Society of St. Cloud.

The quartet enjoys an ongoing performance collaboration with Van Cliburn Gold Medal-winning pianist Olga Kern, with whom they have toured from coast to coast and recorded the piano quintets of Brahms and Shostakovich released on the Delos label. The Dalí has recorded the Weber Clarinet Quintet with Ricardo Morales, famed principal clarinetist of The Philadelphia Orchestra with whom they perform for very select dates. New programming for 2022-2023 season includes ‘The Eight Seasons’ and ‘Folias de Tango’ with Giampaolo Bandini, guitar and Cesare Chiacchiaretta accordion & bandoneón.

The Dalí Quartet is the 2021 recipient of the Guarneri String Quartet Residency, funded by the Sewell Family Foundation, and the 2021 Silver Medal at the inaugural Piazzolla Music Competition. The quartet is the 2019 recipient of the Atlanta Symphony’s esteemed Aspire Award for accomplished African American and Latino Musicians. They founded the much admired Dalí Quartet International Music Festival in 2004 which develops the performance skills of musicians through semi-professional level. Currently Quartet in Residence at West Chester University, the Dalí has also served as a resident ensemble at Lehigh University and given mini residencies at countless colleges and universities in the U.S. and Canada.

Trained by world-renowned artists, members of the Dalí Quartet are from Venezuela, Puerto Rico and the US, and have studied at esteemed institutions such as the Cleveland Institute of Music, Indiana University Bloomington, the New England Conservatory, Juilliard and the Simón Bolivar Conservatory in Caracas, Venezuela. The quartet is based in Philadelphia, PA.

Chasing Light: Music made for 50 States

Not so long ago, world premieres of symphonic compositions went exclusively to world-class orchestras. Regional orchestras in smaller cities with smaller budgets and players with “day jobs” frequently found contemporary music dauntingly difficult as well. Ford Made in America and Meet the composer have sought to bring to smaller communities and their orchestras new music of the highest quality, accessible to both players and audiences alike – although accessible doesn’t mean easy.

Chasing Light received its world premiere with the Reno Chamber Orchestra in September 2008. The work, inspired by a poem written by Schwantner himself, “…draws its spirit, energy and inspiration from the celebration of vibrant colors and light that penetrate the morning mist as it wafts through the trees in the high New England hills. Like a delicate dance, those images intersected with a brief original poem that helped fire my musical imagination.”

Central to Schwantner’s musical imagery is the arch, which is easily audible in the arching phrases in the upper woodwinds, as well as in the architecture of the movements and the piece as a whole. The poem also evokes the image of a rainbow, an arch of reflected light. As a musical metaphor of the idea of “chasing light,” the composer includes numerous canons (called ricercar, or “chase, “during the Renaissance and Baroque).

The four movements of Chasing Light are played without pause – there’s no time to pause when chasing light. The titles for the movements are taken from individual lines of the poem. While Chasing Light should not be regarded as program music, the poem and movement titles offer specific visual images that both listeners and players can draw on to enrich the musical experience. The thematic elements are repeated frequently throughout the piece and become familiar enough for the listener to follow the structure.

In Movement I “Sunrise Ignites Daybreak’s Veil,” Schwantner gives each section of the orchestra its own characteristic texture and sound: rapid filigree arches for the upper woodwinds and piano; strong rhythmic ostinatos for the timpani and basses; and a central fanfare-like theme for the brass. When the ostinato is taken up by all the strings, the tricky meter changes and cross-rhythms create a musical effect analogous to an optical illusion; the stress subtly shifts, blurring the listener’s original sense of meter.

The second movement, “Calliope’s Rainbowed Song: (palindrome-moto perpetuo)”, is, as the title states, a true arch. Here, Schwantner thins the texture, for the first time introducing the piano and individual percussion solos, all contributing to the shimmering effect. Motives from Movement I return, with individual woodwinds provide rapid arch-shaped interjections.

Movement III, “A Kaleidoscope Blooms,” features a haunting oboe solo that the composer wrote for Andrea Lenz, principal oboe of the Reno Chamber Orchestra. In its use of chromatic pitches, the oboe solo represents a departure from the thematic elements of the preceding movement. Schwantner begins with the familiar rapid arches accompanying the oboe, but the “bloom” refers to the gradually addition of more and more instruments.

The title of Movement IV, “Morning’s Embrace Confronts the Dawn,” evokes the image of “daybreak” from the first movement. The music returns to the now familiar melodic, in a majestic restatement.

Born and raised in Chicago, Joseph Schwantner made his living as a jazz musician and arranger while studying at the Chicago Conservatory and Northwestern University to become a “classical” composer. He completed his doctorate in 1968. In 1970 he was the first recipient of the Charles Ives scholarship of the American Academy of Arts and Letters and was elected as member of the Academy in 2002. In 1979 he received the Pulitzer Prize for Music for his orchestral work Aftertones of Infinity. He had taught composition at Eastman, Juilliard and Yale.

Mexican violinist, conductor and composer Juan R. Ramírez Hernández is a long-time violinist with the Atlanta Symphony Orchestra. He has performed and conducted in Mexico and throughout Europe.

Ramirez has been a great advocate of music education, founding the Music for Success! program in Atlanta, and has served on the Board of Directors of the Sphinx Organization. He served for 19 years as conductor f the Atlanta Community Symphony. In addition to the violin, he plays the guitar, mandolin and marimba.

Most of Ramirez compositions are based on the music of his native land. He composed the three-movement Suite Latina in 2001 for string quartet. The version for string quartet and string orchestra premiered in 2016. The three movements contain over half a dozen Latina dance rhythms:

While many of Beethoven’s symphonies broke new ground, the Sixth is both innovative – as it prefigures the Romantic tone poems – and traditional. Beethoven and his audience were readily able to attach literary, emotional or extra-musical concepts to music. His Wellington’s Victory was the latest in a long tradition of musical battles dating back to the Renaissance. And of course, there were musical models for many of the images in the Sixth Symphony – Vivaldi’s Four Seasons and bucolic Christmas pastorals with bagpipe drones, as in Handel’s Messiah or Corelli’s Christmas Concerto – not to mention an extensive vocabulary of rhetorical musical figures from the Baroque, bird calls and other perennial tone painting devices.

But Beethoven seemed to be searching for something different, an ideal way to portray and “express” nature. “Any painting, if it is carried too far in instrumental music, loses expressive quality…The overall content, consisting of more feelings than of tone paintings, will be recognized even without further description,” he wrote in his sketchbook while working on the Sixth Symphony. This and other notes to himself as he worked reveal the Symphony as more than a sentimental outpouring. Here was another of the composer’s creative challenges to be met in the context of his trajectory of self-fulfillment as an artist. As Beethoven’s biographer, Barry Cooper, puts it: “He was faced with two main problems in writing a symphony in the pastoral style: the first was to prevent the music from degenerating into scene-painting or story-telling; the second was to combine the pastoral style, leisurely and undramatic, with the thrust and dynamism of the symphonic style.”

Beethoven wrote more words about the Sixth Symphony than about any of his other compositions. He provided descriptive titles to each of the five movements, while at the same time commenting that the music was self-explanatory and needed no titles. The first movement, “Cheerful feelings awakened on arriving in the country,” builds up none of the intense tension so common in Beethoven’s first movements, being instead an unhurried study in tranquility. The murmuring accompaniment in the second movement, “Scene by the brook,” captures the sound of a flowing brook interspersed with the birdcalls and chirping insects – all within a tradition in tone painting common since the Renaissance.

In a break with the classical symphonic structure, the last three movements run together as a continuous quasi-narrative entity. The third movement, “Merry gathering of country folk,” suggests a village band with the lower strings imitating the drone of a bagpipe. The dance is interrupted by the “Thunderstorm,” a superb impressionistic evocation of lightning, thunder and howling winds. As the storm approaches, the thunderclaps come faster and faster, then slow down as the storm passes. After the final rumbles, a solo clarinet, followed by a solo horn, lead into the “Shepherd’s song: Happy and thankful feelings after the storm.” Instead of a traditional rousing Finale, the bucolic scene ends with the shepherd’s pipe figure fading away into the distance.

Beethoven started to work on the Symphony in the summer of 1807 and finished it in June 1808. It was premiered at a concert (Musikalische Akademie) of his recent compositions in the Imperial Theater in Vienna on December 22, 1808. The program, which was over four hours long, also included the premiere of the Fifth Symphony, the Fourth Piano Concerto, the concert aria “Ah Perfido,” some piano improvisations by the composer, three movements from the Mass in C major and, to top it all off, the Choral Fantasia, which Beethoven composed as a grand finale to the occasion. Such monster concerts were the norm in the early nineteenth century, with people coming and going in the middle as they pleased. Not surprisingly, few stayed for the duration.

The gentle atmosphere of the Sixth Symphony is in sharp contrast to the high-voltage intensity of the Fifth, completed only a few weeks earlier. Although Beethoven fought, quarreled and argued with everyone, friend, foe or patron, with nature he was at peace.