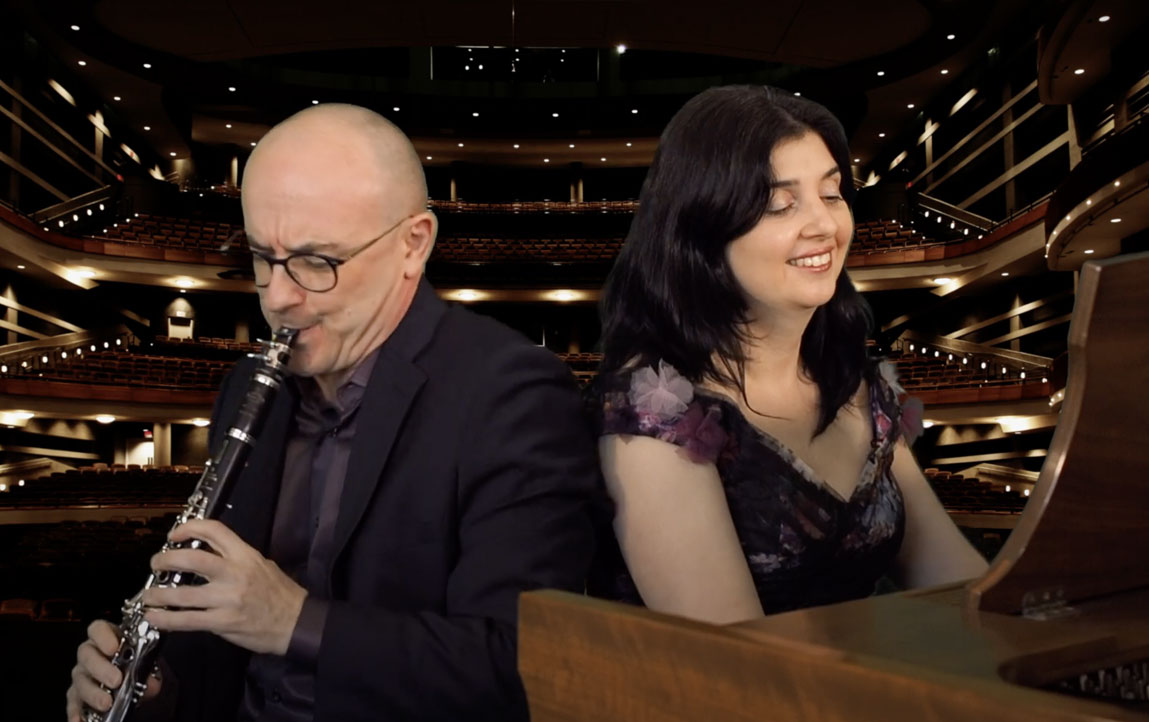 Come back to stamfordsymphony.org to watch the concert live from our homepage on December 11 at 7:30pm. No downloads necessary!

Join the Stamford Symphony on Saturday, December 11, 2021 as we present an Evening of Klezmer. This inclusive event is in affiliation with United Jewish Federation of Stamford, New Canaan and Darien, UJA-JCC Greenwich and The Jewish Historical Society of Fairfield County. The virtual event will include Klezmer music performed by members of the Stamford Symphony, conversations with Stamford Symphony Music Director Michael Stern and Grammy-award winning jazz musician Branford Marsalis, and performances from The Klezmatics and Lamroth Hakol (Buenos Aires, Argentina).

This event is made possible by a generous gift from Caryn and Tomas Haendler.

Featuring conversations with Michael Stern, Branford Marsalis, the Jewish Historical Society, and Zalmen Mlotek, and performances from the National Yiddish Theatre, and more! 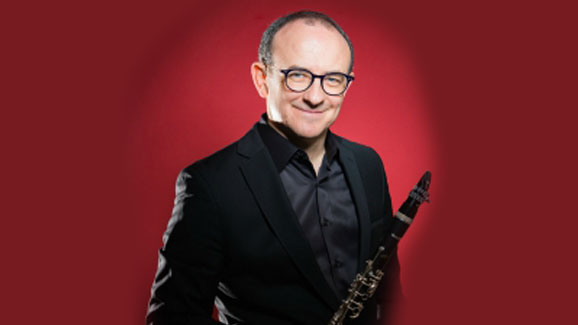 Pavel Vinnitsky was appointed principal clarinetist of the Stamford Symphony in 2013. An avid orchestral musician, he regularly performs with the New York Philharmonic Orchestra, Metropolitan Opera, the Philadelphia Orchestra, Chicago Symphony, Orpheus Chamber Orchestra, the American Symphony and the Orchestra of St. Luke’s. As chamber musician, Pavel Vinntsky is a founding member of ClariAnna Duo that includes his wife, concert pianist Anna Vinnitsky. He also performed with the Met Chamber Players during their Carnegie Hall series as well as with the Wind Soloists of New York, the St. Luke’s Chamber Ensemble, the International Contemporary Ensemble. He is on the artist roster of many international chamber music festivals.

A dedicated educator, Pavel Vinnitsky has conducted master-classes at universities and music schools nation-wide. He is on the faculty at NYU Steinhardt School of Culture, Education, and Human Development. His discography includes recordings for Deutsche Grammophon, New World and Bridge Records labels, numerous broadcasts on WQXR, CBS, Israeli National TV and Bavarian Radio as well as major motion picture soundtracks. 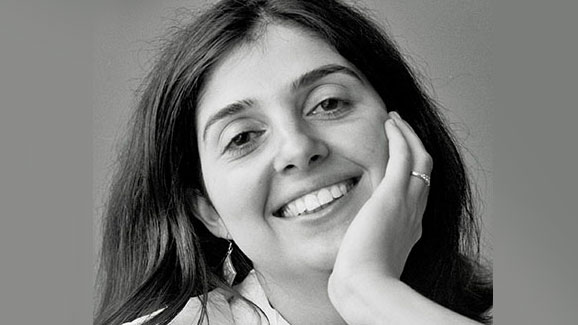 Additionally, Dr. Vinnitsky enjoys a varied career as a collaborative artist, performing regularly with international soloists as well as the members of The New York Philharmonic and Metropolitan Opera Orchestras. When not in a concert hall, Ms. Vinnitsky is immersed in composing and arranging. A world premier of her newly composed Sonata for Clarinet and Piano will take place in April, 2021 in New York City.

As a passionate advocate of music education Anna has served on the piano faculty of the Kaufman Center’s Lucy Moses School and is a founder of Westchester Piano Studio – an innovative education initiative. Currently, Ms. Vinnitsky holds a teaching position at St. Luke’s School in Manhattan and has been a guest lecturer at Universities nation-wide. With a multicultural musical background comprising both the European and American traditions, Anna holds a Doctorate of Musical Arts from State University of New York (SUNY) at Stony Brook, as well as master’s degree. 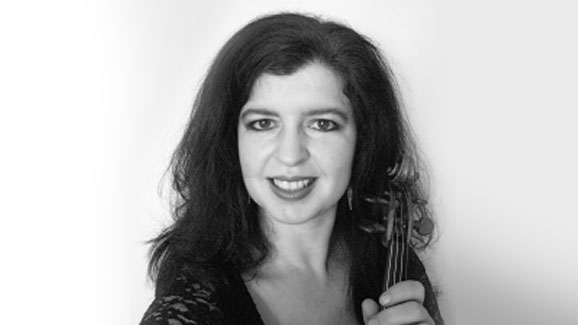 Violinist Louise Owen has been praised as “a brilliant performer” by the Boston Globe. She has enjoyed a diverse musical path over the years, performing annual chamber music concerts with world-renowned pianist Menahem Pressler, touring North America and Europe with Barbra Streisand, making her Broadway stage debut opposite Christopher Walken in “James Joyce’s The Dead and serving as concertmaster on tour for Harry Connick Jr. since 2011. She has an active freelance life in New York City, playing in many of the city’s leading ensembles. She has also been a member of the Stamford Symphony for eight years. Louise loves giving marathon solo recitals whenever possible and is currently the concertmaster of Anastasia on Broadway.

A native of Southern California, Louise received much of her musical training in Boston at the New England Conservatory and she has continued to work extensively with Joey Corpus in New York City over the past two decades. She is a passionate home cook and part-time chocolatier in between gigs and she has written about her musical and culinary adventures on her blog, Kitchen Fiddler (www.kitchenfiddler.blogspot.com). Louise has been featured twice on “60 Minutes” in “Endless Memory” and “Memory Wizards”, the Emmy-nominated profiles about people with an extremely rare ability called Highly Superior Autobiographical Memory.

Violinist Robert Zubrycki is Concertmaster of the New York City Chamber Orchestra, a member of the Stamford Symphony Orchestra, the American Symphony Orchestra, Assistant Concertmaster of Orchestra Moderne NYC and principal violin and frequent soloist with the Amici New York Orchestra. He has recently performed as Concertmaster for the New York Choral Society at Carnegie Hall, Encores! at City Center, Opera Orchestra of New York and the Northeastern Pennsylvania Philharmonic. He performs with the American Ballet Theater orchestra. A veteran of dozens of Broadway shows, Bob is in the orchestra of Carousel, and formerly in She Loves Me and A Gentleman’s Guide to Love and Murder. He can be heard on the recent cast recordings of She Loves Me, An American in Paris and Paint Your Wagon (violin and mandolin). He has won an Emmy Award for his musical contribution to the documentary The Curse of the Bambino.

As a chamber musician, Robert is the first violinist of the Queen’s Chamber Band and the Queen’s Chamber Trio. The Trio’s recordings of Mozart, Haydn and Beethoven are available on the Lyrichord label. Robert toured the United States with the Abaca String band, including performances at the Chautauqua Institute and the White House. He is currently the director for Concerts Around the Corner and the Cultural Arts Coalition in Brewster, NY. Bob is also an avid gardener.

This past year, he became a US Masters Swimming Adult Learn-to-Swim Instructor and is an American “Red Cross” certified lifeguard. 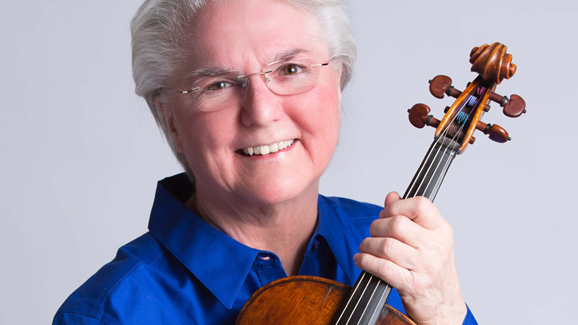 Lois Martin, a native of York, PA, began her viola studies with Arthur Lewis at the Peabody Preparatory School. She completed her undergraduate work at the Eastman School of Music, where she was a scholarship student of Francis Tursi. During this time, she was a member of the Rochester Philharmonic Orchestra. She continued her graduate studies at the Juilliard School under the tutelage of Lillian Fuchs. Lois is a founding member of the Atlantic String Quartet, which is dedicated to the performance of newly written compositions. Her continuing commitment to contemporary music includes performances with the Group for Contemporary Music, ISCM Chamber Players, Ensemble Sospeso, Ensemble 21, New York New Music Ensemble, Speculum Musicae, Composers’ Guild, Da Capo Chamber Players, Composers Forum, and Steve Reich and Musicians.
On the Jazz and Popular circuit, she has performed with artists including Michael Brecker, Randy Brecker, Chris Potter, Ornette Coleman, Esperanza Spalding, String Fever, Shirley Bassey, Elton John, Paul Simon, Tyne Daley, Gil Goldstein, Don Alias, Richard Bona, Mike Mainieri, Judy Collins and Roberta Flack.

Currently, Lois is Principal Violist of the Stamford Symphony, Amici New York, and The Little Orchestra Society. She is a member of the Orchestra of St. Luke’s, American Chamber Ensemble, and frequently appears with the Mostly Mozart Festival Orchestra and New York City Ballet Orchestra. She is also on the faculty of the Composers’ Conference at Wellesley College, and has taught at Princeton University.

Lois has recorded the works of over 50 contemporary composers. She premiered Charles Wuorinen’s Viola Variations at Merkin Hall in New York in the fall of 2008, and also had the opportunity to perform this work at the Library of Congress in 2009 for Wuorinen’s 70th birthday celebration. 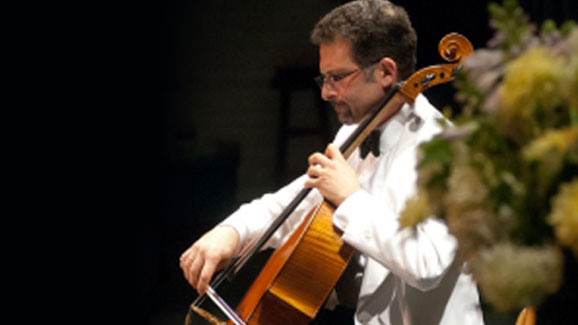 Peter Sanders, cello, is a native New Yorker and a graduate of the Manhattan School of Music. Mr. Sanders has been a member of the New York City Ballet Orchestra since 1999 (for which he has served as Acting Principal), performs with the Riverside Symphony, the Stamford Symphony and has performed and recorded as a guest artist with the Perspectives Ensemble. He has toured Southeast Asia twice with the New York Symphonic Ensemble and as concerto soloist with the group performed in concerts in Taipei and Singapore. He is Artistic Director of the Central Vermont Chamber Music Festival which had its inaugural season in 1993. Mr. Sanders was a winner of the 1998 Artists International award as a member of the Hollaender Ensemble and is currently a member of the Ariadne Trio. He has participated in many summer festivals including the Colorado Music Festival, Skaneateles Festival, Crested Butte Chamber Music Festival, Eastern Music Festival (faculty position), CVCMF, Lancaster Festival, Ohio (where he was principal cello from 1992-98), Windham Chamber Music Festival, the Sherman Chamber Ensemble, the Park City & SLC Autumn Classics Music Festival and the Moab Music Festival. As a studio musician Mr. Sanders has recorded for a variety of popular artists including Pat Metheny, Jewel, Kathie Lee Gifford, Andy Bey and Carlinhos Brown. He can be heard on the Delos, Muse, Bridge, RCA Victor-Red Seal, New World, On the Lamb and KOCH International Classics labels. Radio and television broadcasts include WQXR, APM’s “Performance Today”, PBS and Vermont Public Radio.